BILARANK-M Combination of BILASTINE 20mg+MONTELUKAST 10mg belongs to a class of medication called ‘anti-allergic medication primarily used to treat allergic symptoms like sneezing, runny nose, congestion, stuffy nose or watery eyes. An allergy is a condition that occurs when the immune system reacts to a foreign substance that is typically not harmful to your body. These foreign substances are known as ‘allergens’ Some might be allergic to certain foods and seasonal allergies like hay fever, pollen, or pet dander. One of the main symptoms of allergy is cough, and it acts as a reflex action in the throat when there is any mucus or foreign irritant entry into the respiratory system 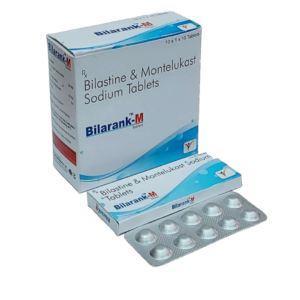 Bilarank-M combines two drugs: Montelukast (leukotriene receptor antagonist) and Bilastine (antihistamine). Montelukast belongs to the class of leukotriene receptor antagonists that block the action of chemicals called leukotrienes released from the lungs, causing inflammation (swelling) and increased mucus production in the airways. Thereby, reduces inflammation, mucus production, and narrowing in the airways. Bilastine belongs to the class of antihistamines (anti-allergic drugs) that works by blocking the action of histamine, a substance responsible for causing allergic reactions. It helps relieve allergy symptoms such as sneezing, running nose, watery eyes, itching, swelling, congestion, or stiffness. 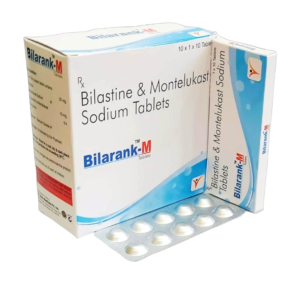 There are no reviews yet.

Be the first to review “BILARANK-M TABLET” Cancel reply

Thanks! Copy your coupon code

This is a demo store for testing purposes — no orders shall be fulfilled. Dismiss